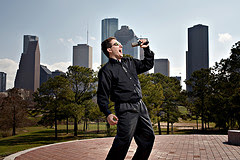 I love this photo of Steven. As soon as it was shot, I knew we had a hit. In reality, Steven is a modest guy and the title "Mr. Media" was given to him by a client. He doesn't taught this, but I thought it was appropriate given this image. Steven Kay is an emerging radio personality in the Houston market and growing his offerings. Go to www.stevenkaylive.com to learn more. Please tell him you heard about him from the VORTEX!

Photography provided by Joe Heiliger (www.jheiliger.com). Joe was interviewed on Steven's radio show "Life Business and Money, with Steven Kay" today. He is speaking on the importance of photography technology in business and in life. Mr. Heiliger is the VORTEX's personal photographer. Listen to his radio interview here: <Joe Heiliger> fast forward to last 20 minutes of interview stream.

Are you a marketing expert or marketing evangelist? Do you provide resources to marketing strategists? This is your invitation to contact us, so we can profile your company and expertise. We will place your company in the "Marketing Resources" section of the blog in the "Category FIVE" section below. E-mail info@marketingdynamics.org (RE: Vortex). Once you are placed, you are welcomed to promote that you are a profiled at "TheMarketingVortex.com". Get caught up in The VORTEX!

Posted by Andy Valadez at 7:50 AM No comments: Links to this post 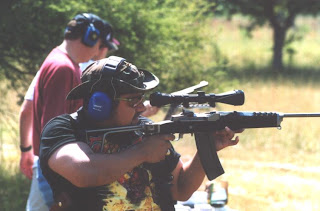 Politics, war, and marketing share similar comparisons - a battle for the mind. The stakes are high. I am finishing "On Combat," written by Lt. Col. Dave Grossman, what an amazing man of our time. He trains our military and law enforcement elite and advises martial artists and others on the preparation for the "Universal Phobia of Interpersonal Aggression." This fear stems back from our time in the wild, where man had to be on alert for an attack by animal or foe. In a civilized society, the fear is always present and globally, interpersonal conflict is rising. He says the "military now looks like the police and the police looks like the military." He cites, we are relatively safe in America despite the displays on the nightly news. Most aggression is repeated by the same group of people, they are the wolves in our society.

Psychographics plays a crital role in marketing (i.e., fear, greed, safety, etc.). Marketers recognize that human beings are attracted to brands that solve these deep seeded needs. As an avid reader on military history, politics, and martial arts, I can see the many comparisons in marketing. For example, Marlboro cigarettes were once a low-selling, female brand many decades ago. When marketers began to position this cigarette with the cowboy on the open range ("The Marlboro Man" was born), cigarette sales sky-rocketed and human behavior was changed. Now, I am not anti-tobacco, I love a great cigar. I also believe that as long as the product is not illegal, people should have their right to smoke - the price of having a free society and the right to make wrong choices. However, being a realist, one has to look at the destruction that cigarette smoking has left. Marketing is as powerful as war. I don't know the death toll caused from inhaling the 4,000 dangerous chemicals, but we all know it is high. I do believe that education plays a vital role until the law is changed or people decide they don't want to smoke.

As a marketer and warrior ( I served in the Marines from 88 to 92 and still continue to hone my warrior skills), there are many things I won't market. For the purposes of this blog, it is good enough that the reader know that marketing is a weapon, use it wisely. Get caught up in The Vortex!
Semper Fi!
Andy Valadez
p.s. The photo above was taken on the range with a group of guys from my church. We had a blast (pardon the pun). One of the young men, an Eagle Scout, got to fire-off 40 rounds from my Ruger mini-14. He later joined the Marines and joined an elite force within the Corps.

Posted by Andy Valadez at 7:27 AM No comments: Links to this post

Email ThisBlogThis!Share to TwitterShare to FacebookShare to Pinterest
Labels: battle for the mind, marines, marketing, psychographics

Marketers need to have an attitude about what they do. We are the visionaries that communicate great brands and help our clients make millions, billions! So, if you are going to market, think big. Walk confidentally, communicate well and be clearly understood. I motivated my team recently by declaring that it is our city (any city we are marketing in). With that thought, we are all thinking big and working aggressively to seize opportunities. Hope you get caught up in the VORTEX! 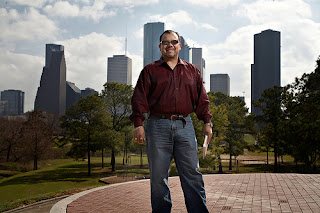 
Please consider supporting this blog at $5.00:

Posted by Andy Valadez at 11:07 PM No comments: Links to this post

I was interviewed on Monday 2/19/07 as the Marketing Advisor to the show. Houston Business Review is the longest running business show in Houston on CNN 650 AM a CBS Station. Hear the interview here:

Posted by Andy Valadez at 9:06 PM No comments: Links to this post

The Winds Are a Blowing!

Okay. It was past time for me to do my own blog. After getting many going for my clients, I figured I had to practice what I preach! Been having a blast in Houston in the marketing world this year. Check out this blog I started for my buddy Steve Levine, www.SteveLevineMedia.com

It is rough, we are going to redo it, but it is getting a lot of attention. I'll write more later. Get cuaght up in The Vortex!

Posted by Andy Valadez at 7:16 PM No comments: Links to this post